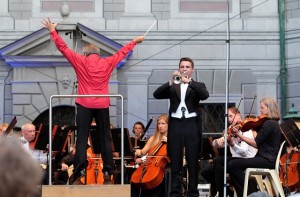 The anniversary concert of the Blutenburg Kammerphilharmonie München orchestra had Haydn’s final symphony No. 104 in D major, also known as the “London” symphony, and Egon Wellesz’s first symphony in C major, Op. 62 in its programme. On the evening of 25 October 2015, Jörg Birhance, conductor from the founding years, took up the baton again for the 10th anniversary concert in Maria-Ward-Straße 5, near Nymphenburg Palace in Munich.

The Blutenburg Kammerphilharmonie München selected a very daring programme on various levels for its anniversary. Will the audience like the unknown symphony awaiting its third performance on this evening? And will the orchestra manage to rise to the occasion of this musical battleship that even demands an intense period of preparation from professional orchestra players? The symphony Op. 62 with its first and last movement in c minor ending in C major and the second movement in g minor is, no doubt, one of the greatest challenges for the musicians and the conductor. The prima facie seemingly pompous first movement, if approached superficially with its catchy theme, reveals unforeseen dense and intricately channelled lower voices. Understanding and then also conducting these intricacies is a virtual Sisyphean challenge. The second movement comes up with perpetual quintuplets, demanding utmost virtuosity and finesse from all parties. The finale, that seems like the Abgesang of all previous hustle and bustle and simultaneously contains major points of culmination, opens up completely new spheres of sound; it could obviously be reminiscent of Mahler‘s later work or of Bruckner’s ninth, albeit more cohesive in terms of formality and more concise than Mahler thanks to its brevity. This is where the whole cast of brass comes into play, filling the stage with four French horns, three trumpets and trombones each, and a tuba. The reason why Wellesz’s outstanding first symphony, as well as the composer himself are still unknown remains a true enigma. Wellesz, who can boast excellent teachers both in musicology with Guido Adler and in composition with Arnold Schönberg, completed nine symphonies (how could it be otherwise!) in spite of entering into the genre quite late (he was almost sixty); at this stage, however, he had already written a large volume of orchestral work and operas, and a plethora of chamber music. As an expert in Byzantine music and even though he studied with Schönberg, Wellesz’s style was by no means dedicated to dodecaphony; instead, he concentrated on a highly interesting and still very appealing free tonality, appearing in all possible textures thanks to his exceptional orchestration gift. The first symphony was performed two years after its completion by Sergiu Celibidache and the Berlin Philharmonic Orchestra in 1947, followed one year later by Joseph Krips and the Wiener Symphoniker; this is where the history of reception ends, apart from one rather poor CD recording that was neither preceded by a proper performance nor by proper rehearsals – to this very day!

All in all, the Blutenburg Kammerphilharmonie München gave a strikingly superior performance. Of course one could find the odd inaccurate tone, asynchronicity or little squeaks few and far between; in general, however, the overall performance of this amateur orchestra was outstanding. The great man of the evening, however, was Jörg Birhance, who founded the orchestra in 2005 and conducted it until 2011. His distinctive work with the orchestra can be felt in every single bar of music, redeeming with a consciousness for chamber music all the instrumentalists‘ technical imperfections. What he as a conductor can make of the orchestra is nothing less than astounding! His air in his generous gesture of Haydn is very clear and reveals the symphony‘s form in all its clarity; even the compositional intricacies of the master’s last symphony become very clear. With Wellesz, he places an emphasis on the multitude of lower voices of which a considerable proportion is exquisitely balanced in texture, again allowing the shape to become perfectly sculpted: The fugue in the middle of the first movement commences with such clarity, leaving no doubt it could have been otherwise. In contrast to Haydn, that seemed to be easier, the enormous efforts of rehearsing are clearly discernible in this first movement and reap a bountiful harvest with even more precise intonation in spite of all difficulties. The second movement is particularly captivating and diverse with repeated pleasant surprises. For those who were not inclined to take their hats off to the orchestra earlier, this point definitely was the most compelling; the quintuplets pearl in an impressively clear manner and the askew and seemingly free-tonal voices are arranged at a high level with freed expression. It is last but not least the conductor to whom we should take off our hats after this modern and seemingly most peculiar movement of the symphony – the well-nigh folly of rhythmical polyphony and the interchange of the main voice between four instruments sometimes in each bar is revealed in splendid precision. Even the surprising twists appear spontaneous and fresh, new acoustic landscapes emerge unexpectedly and disappear in the same way they appeared. Unfortunately, an outbreak of audience coughing disturbed the third movement; the conductor and the Kammerphilharmonie, however, remained concentrated and provided a dignified finish to this great work.

It is a striking charisma with which Jörg Birhance steps in front of the orchestra, creating the central point of concentration ab initio. Once he has found his way into the happening, he remains “one” with the soundscape, leading his musicians in a suggestive manner. Birhance conducts with perfected technique, standing tall with a sophisticated beat that principally emerges from his elbow and sometimes expands to the entire arm and shoulder with which he inadvertently picks up the instrumentalists and joins them in unison. His actions are fully dedicated to music and his profound devotion to the works of music can be felt in every single moment.

It is merely two questions that have yet to be answered after this evening: Why is Egon Wellesz still so fameless in view of such impressive work that is still catchy in spite of free tonality and would surely appeal to many people? And why has Jörg Birhance not fared better than the master whom he favours with such devotion? Even after so many years of excellent work, Jörg Birhance is still only known among experts. He conducts small orchestras and amateurs instead of well-known orchestras where he would – no doubt – more than enrich their selection of programmes and range of expression.

[To the german review of this concert]